We talked this month with Mr. Vice Mihanović, CEO of Split Port Authority, Croatia’s largest passenger port. In what follows, Mr. Mihanović will tell us more about what the growth in passenger traffic meant for the Port, his long-term vision for the Port, the importance of the relation with the local community, and much more! 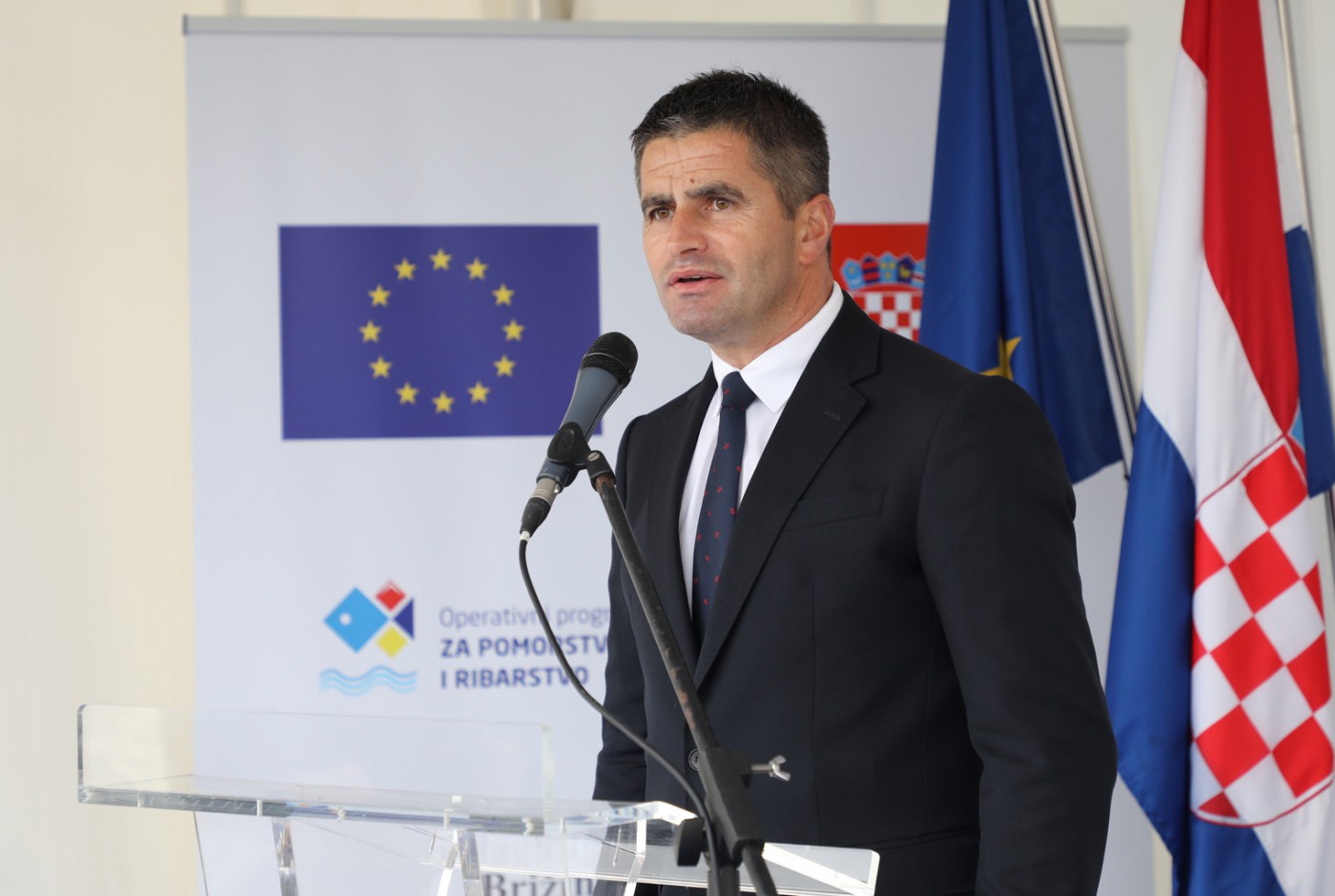 Can you briefly tell us about the Port of Split? What are its main characteristics and challenges?

The Port of Split is by far the largest passenger port in Croatia. The Port of Split, because of its purpose, is a port open for international traffic. Its size and importance make it a port of special international economic interest for the Republic of Croatia. Our port is a major transport hub, especially with regard to connecting Central Dalmatian islands in terms of passengers and cargo. There are six port basins: two of them are passenger traffic basins, while four are cargo basins. The connection with the Port of Split is a prerequisite for maintaining the economy, quality of life and development on the islands of Brač, Hvar, Šolta, Vis, Lastovo, Korčula and Drvenik Veli, and Drvenik Mali. The Port of Split plays a key role in connecting Croatia and Italy. The port provides top quality service for cruise ships. The Port of Split is of crucial importance for the development of tourism in Split and the region as a whole, and a major influence on the regional and national economy. In two decades, passenger traffic more than tripled, growing from 1.6 million to 5.6 million passengers per year, while vehicle traffic more than doubled from 327 thousand to 830 thousand vehicles per year. In recent years growth amounted to more than 5% a year. The port is a logistical link, with an economic advantage thanks to its location. The excursion programme for cruise ship passengers contributes to the development of the hinterland in our region.Besides being a passenger port, Split is also a significant cargo port. We are connected with the hinterland both by rail and roadlinks.

A major challenge of our port is to raise the level of service with a strong traffic growth while playing a responsible role in the community by acting in accord with sustainable development principles. Our goal is, by introducing new technologies, to become a smart and sustainable port.

I have been working for the Port of Split Authority for over two decades. My beginnings were in the Port Operational Centre. Then I became the coordinator of the operations of the Port Operational Centre, and after that I became the Head of the Centre. Before becoming Managing Director, I spent a decade working as the Head of Commercial - Operational Sector. Over the years, I gained valuable all-round knowledge of the port operations, as well as experience.

What is your vision for the Split Port Authority for the next decade?

There are still major infrastructure projects to be completed, but our focus is broader. The Port of Split Authority is planning to develop the port as a “Smart Port” in order to increase its effectiveness, security and sustainability and prepare the port for the changing global environment. This could be achieved by exchanging information within the port in order to increase the quality and the efficiency of the port as an important link with the community and supply chain. The Port of Split is facing new challenges with the constant growth of ferry volumes and cruise ships. However, limited port area and berthing spaces congestion may, if unattended, become a problem. Therefore a Smart Port system is necessary for the Port of Split to reduce congestion and improve efficiency in the long run, in order to be able to handle both passenger and cargo volumes without disrupting the port users or citizens of the city. By upgrading the system, optimal results regarding the improvement of the business processes can be achieved. In particular, this relates to planning processes and procedures. Data collection technical capabilities will also be increased and additional training will be provided to employees. We will provide a comprehensive display of interactive information to users in real time, introduce a free Wi-Fi network, interactive displays, an app for smartphone, and QR codes for quick info-points. All of the provided information will be multilingual.

Apart from being able to make use of EU funds, the fact that Split is located in the centre of the EU's Adriatic-Ionian macro region and that the Port of Split is a crucial hub for local and international maritime travel in this part of Europe further emphasizes our competitive edge. A sustained growth in tourist arrivals has strongly contributed to further development. We have successfully met various challenges such as EU border crossing regulation. The priorities of the Croatian Presidency of the Council of the European Union such as “A Europe that develops” and “A Europe that connects”, including a European transport area, are fully compatible with our own priorities. I believe that the Croatian Presidency of the Council will result in stronger cohesion and cooperation among EU citizens.

Passenger traffic plays an important role in the Port of Split, with both ferries and cruise ships regularly calling at the port. Do you foresee a bright future for the cruise and ferry business in your port? Could you briefly describe the main challenges you face in this field?

The primary objective of the Port of Split Authority is to provide the best possible port service to connect the Central Dalmatian islands to the Croatian mainland throughout the year. Our passenger traffic growth is robust and I expect that this trend will continue. It is essential that we continue to manage the flow of passengers and vehicles effectively. Projects and investments are necessary to strengthen the Port’s performances.

One of the challenges that we face is that the growing number of vehicles entering the port causes heavy congestion in the city, especially in the centre. This is particularly evident during the high season when the traffic within the port is the heaviest. Around 830 thousand vehicles per year, including 190 thousand trucks per year transporting cargo to and from islands and Italy, cause major congestion problems, especially in the city centre. I am confident that we will successfully meet this challenge. The port benefits from excellent opportunities to expand on its current intermodal transport infrastructure, which serves both its passenger and cargo port basins via railway and the A1 motorway between Split and Zagreb.

Split is already a must-go touristic destination and specifically a cruise travel destination. Besides the UNESCO listed Diocletian’s Palace in the city centre, there are many shore excursion locations that are easily accessible from Split. We completed the construction of two new cruise berths on the outer side of the breakwater. The berths accommodate cruise ships with a maximum length of at least 320 meters and 270 meters respectively, with 10.5 meters maximum draft, significantly increasing our capacity to handle large ships and raising the level of service, safety and security for passengers. In 2019, 360 thousand cruise ship passengers passed through the Port of Split. The number of cruise ship passengers is growing and we want to ensure that this growth is sustainable.

The Port of Split is a comprehensive port of the Trans-European Transport Network (TEN-T). Is the port involved in any EU projects? What is the importance of EU funding for a port like the Port of Split?

The investments in the Port of Split’s facilities and infrastructure have been a timely and optimal response to a steady increase in the number of passengers. This partly reflects the increased interest in the city of Split and the Central Dalmatia region as a tourist destination. We recently completed a major project worth 29 million euro including VAT. This project included the construction of berths for cruise ships and ferries on the outer side of the breakwater. The project was financed by an EBRD loan.

EU funds are crucial for our future development. By investing in the new infrastructure, the Port of Split Authority aims to reduce congestion, especially in the city centre. In the area of Stinice, we are planning to create a new operational area for Ro-Ro ships, including ferries. This is our “Project of reconstruction and extension of the Northern port in the port area of the Vranjic-Solin basin under the management of the Port of Split Authority”. We plan to relocate cargo trucks from the City Port basin in the city centre to the new infrastructure. The project has been prepared for co-financing from the EU funds and is worth around 43 million euro. At the moment, the construction works are underway for the Investment in Brižine Fishing Port worth 6 million euro. The project is co-financed with EU funds. There are several other infrastructure projects that are being prepared for EU co-financing, as well as several completed, ongoing or prepared EU projects on cross-border cooperation.

With its Green Deal, the EU aims to have a climate-neutral economy by 2050. How do you think the European port sector can contribute to decarbonising the logistic chain?

The goal is to make our Environmental Management System, which will soon be submitted for PERS (Port Environmental Review System) certification, a comprehensive, effective and fully usable tool for managing environmental impact and which will contribute to the reduction of pollution, amount of unseparated waste, energy consumption, noise and other negative impacts on the environment. We plan to be less dependent on conventionally-generated energy by switching to renewable energy. Therefore, the Port of Split Authority aims to promote eco-friendly mobility by redistributing energy, thus reducing energy consumption and saving on costs. For instance, we are considering the possibility of providing fuel supply services to cruise ships and other ships using LNG fuel.

The cohabitation of ports and cities is at the centre of this year’s ESPO Conference in Oslo. Ports combine public and commercial interests and have to find the right balance between those two interests. What are the main challenges to the port-city relationship in Split? How does the Port of Split ensure a good relationship with its local community?

The Port of Split Authority is a public institution, public interest is thus of primary importance for us. In particular, we play a major role in island connectivity. Besides the citizens of the Central Dalmatian islands and the City of Split, our stakeholders include the citizens of our county and neighbouring counties. We closely cooperate with the City of Split and other local authorities, such as the County of Split-Dalmatia and the Croatian Government, and especially our Ministry of the Sea, Transport and Infrastructure. We emphasise proactive communication during the strategic planning and project preparation activities and regularly invite local and regional stakeholders to join us while we plan our activities. Such a modus operandi is not only desirable but also essential. Our stakeholders, in particular the City of Split and the County of Split-Dalmatia, have reciprocated that. When we plan a new infrastructure development project, we take into account the problem facing the City and the County. Thus, for instance, when we plan to relocate cargo trucks from the city centre to a new location, we help the City as well as our port.