Today, ESPO’s General Assembly unanimously elected Zeno D’Agostino as its new Chair. Mr D’Agostino is President of Port Network Authority of the Eastern Adriatic Sea since 2015 and has a long-standing career in transport and logistics. He succeeds Annaleena Mäkilä who chaired the organisation during the last two years. 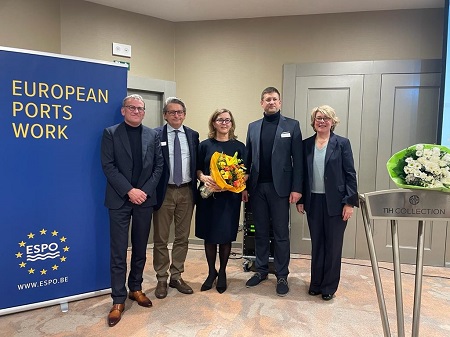 Upon his election, Mr D’Agostino said: “I am honoured to have received this prestigious appointment. I would like to thank first and foremost Annaleena Mäkilä and all those who believed in me and my work during my years as vice-president. We are living in difficult times, during which the role of European ports is becoming crucial for the economic and geopolitical balance at both the European and global scales. We are playing a leading role in many epoch-making challenges, such as the energy transition. It is therefore essential for the European port system to take on these challenges with a shared approach and concrete proposals. I am talking about solutions to be identified through constant dialogue with the European policy makers.

ESPO has been and continues to be the right tool to pursue these goals, adapting European policies and strategies to the challenging times we are experiencing in order to achieve the results we all hope for. From the energy transition to the governance of the ports of tomorrow, there are numerous aspects of innovation that will need to be pursued, and we will do so with a steady hand on the helm. We will also improve our communication efforts, in order to reach a wider audience than just our sector. Indeed, the citizenry is growing more aware and interested in the crucial importance of our sector. In moments of crisis such as this one, when we are exposed to constant shocks, ESPO can play a key role as a natural advocate for the interests of Europe’s ports”.

Today, ESPO has also published its Annual Report 2021-2022, which outlines the activities of the organisation over the past year. A copy of the report can be found here.

This evening, ESPO will disclose the winner of the ESPO Award 2022 on Societal integration, during a ceremony and dinner being held in the BOZAR in Brussels. Four projects have been shortlisted: the projects of ports of Ceuta (Spain), Barcelona (Spain), Tallinn (Estonia) and the cooperation project of the ports of Ancona, Ravenna, Venice, Trieste, Rijeka, Zadar, Split and Dubrovnik (Italy and Croatia).

The winner will be announced around 10 pm tonight.