Port Pro of the month Port of Alexandroupolis

Our port pro of the month is Mr. Konstantinos Chatzikonstantinou, CEO of Alexandroupolis Port Authority in the North of Greece, near the borders with Bulgaria and Turkey. In this interview, Mr. Chatzikonstantinou discusses the growing importance of its port since the tensions in Ukraine, its strategic role in defence, trade and many other interesting topics! 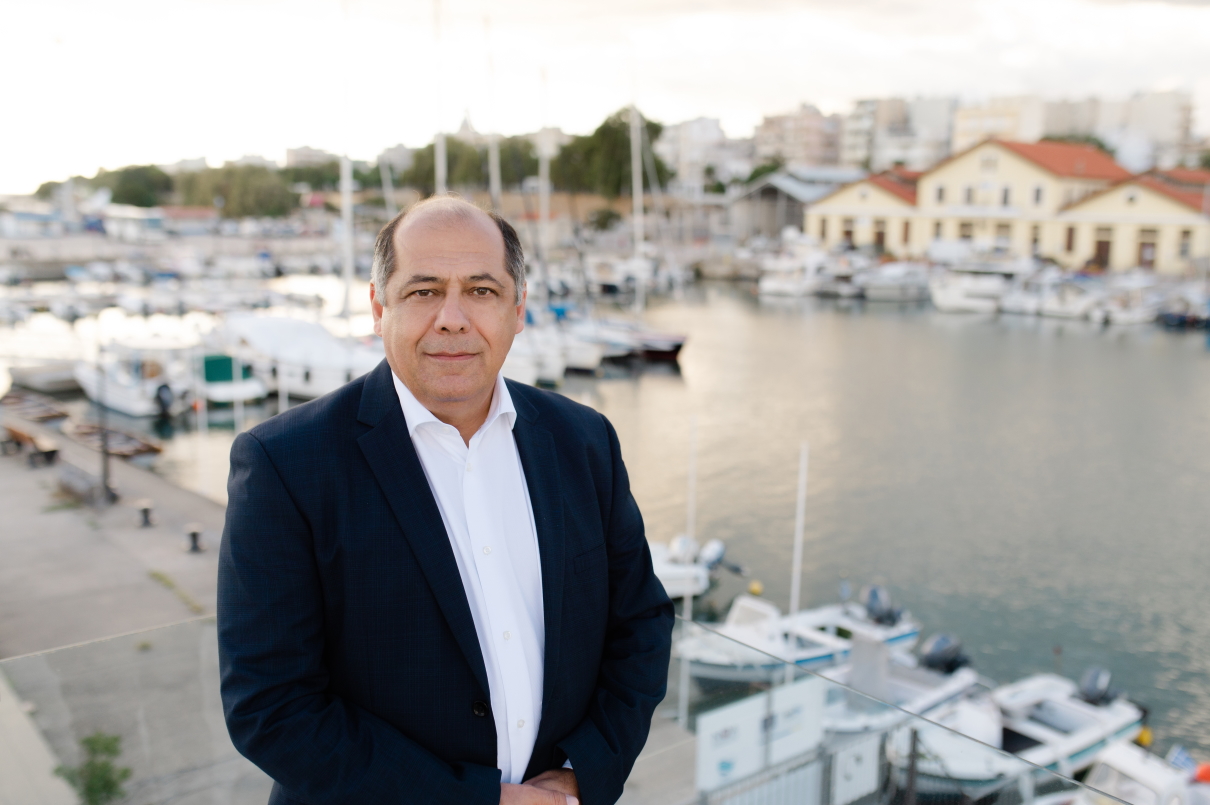 1. Can you briefly tell us about the Port of Alexandroupolis? What are its main characteristics and challenges?

The port of Alexandroupolis is mainly a commercial port which connects the mainland with Samothrace and Limnos islands. As a commercial hub, the port receives bulk cargoes (agricultural products), building materials as well as equipment for the implementation of large projects in the area such as the Trans Adriatic Pipeline (TAP). At the same time, the port also supports the movements of NATO military equipment.

My vision for the port of Alexandroupolis is that it will be transformed into a logistics gateway for the wider Balkan region. In this context, the full development of the commercial zone of the port with the construction of a new pier, the further dredging of the port basin, the installation of modern mechanical equipment such as cranes and the full development of the land zone, including the trade free zone, storage areas and silos, are key goals in the coming years. At the same time, on the western side of the port, tourism development is planned through the construction of a marina for yachts. The above investments combined with the completion of the Eastern city ring road, which interconnects the port with the Egnatia motorway, are expected to dramatically increase the volume of work and consequently its contribution to the local economy. Simultaneously, the complete upgrade of the railway line with the construction of a double electrified line between Alexandroupolis and the Greek-Bulgarian border will also intensify the port’s activity/traffic.

3. If we understand well, the governance model of the Port of Alexandroupolis will change. Could you explain how the port is currently governed and how it will change? The Greek model with a Ports Regulatory Authority is quite unique in Europe. Could you describe the different functions of and the cooperation between the Port Authority, the Ports Regulatory Body and the Shipping Ministry?

At the moment, Alexandroupolis Port Authority SA is a 100% public organisation owned by the Hellenic Republic Asset Development Fund. An international tender is already underway through which 67% of the shares are sold to the private sector. After the completion of the sale, Alexandroupolis Port Authority SA will be a private company in which the Greek government will hold a strong minority share of 33%. All port management authorities in Greece, regardless of ownership status, are under the supervision of the Ports Regulatory Body and the Ministry of Maritime Affairs and Insular Policy in order to operate within the framework of European and Greek law. 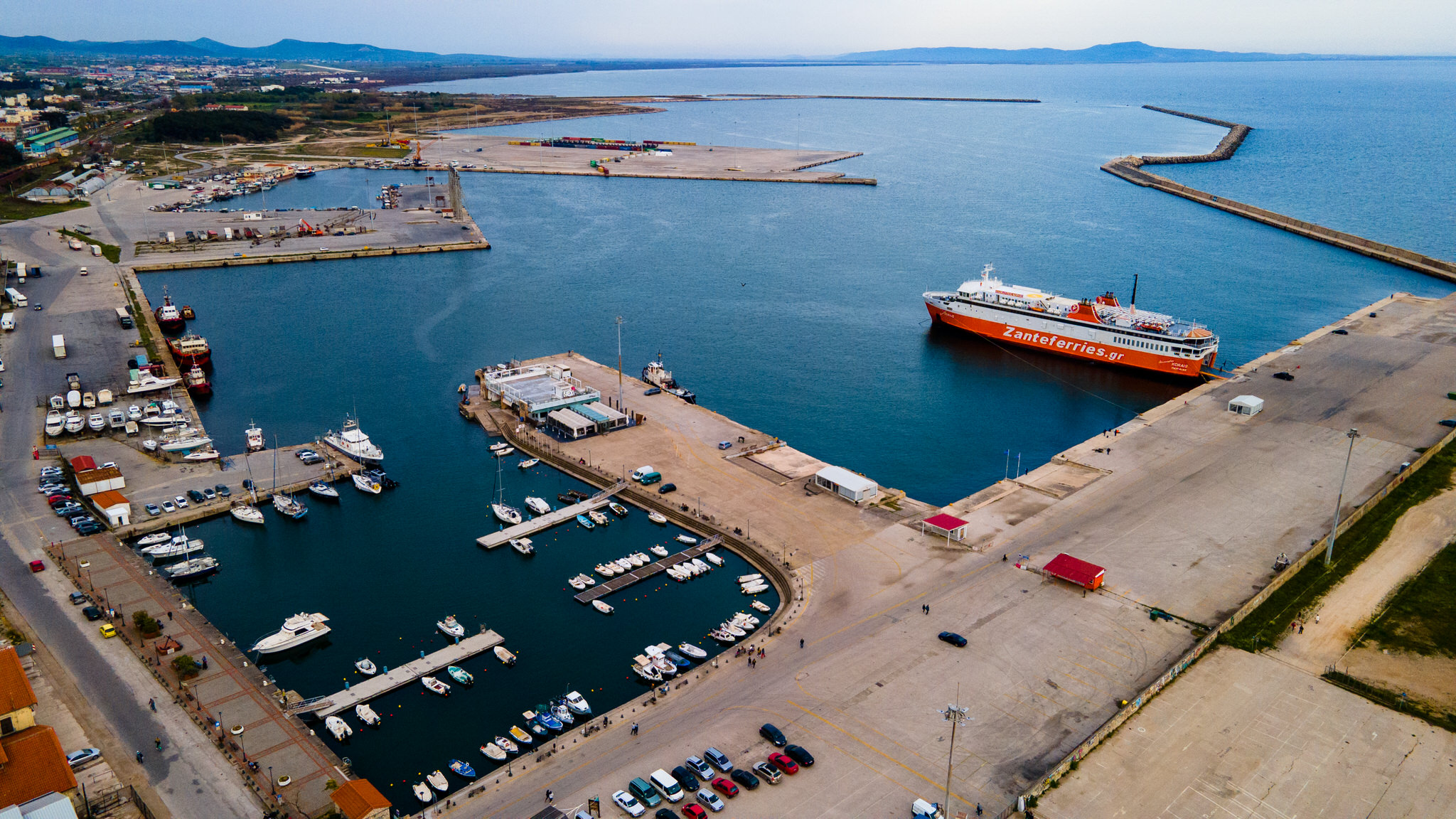 4. The Port of Alexandroupolis is of great strategic importance in the Eastern Mediterranean and the Balkans. Has the role of the port changed since the Russian invasion in Ukraine? If so, is it easy to adapt to the current geopolitical challenges?

As an entrepreneur myself, I am well aware that location is of capital importance in business. Alexandroupolis is located at the southern end of the 90's Pan-European Corridor IX (Helsinki FI – Alexandroupolis GR) while at the same time it is accessible by sea both from the Atlantic Ocean via Gibraltar and from the Pacific Ocean via the Suez Canal. As an international trade hub, it is called upon to play an important role in the emerging new conditions and needs for bypassing the Bosporus Straits due to the war in Ukraine. The current contribution of the port of Alexandroupolis to NATO's military logistics, as well as the looming participation in the EU Solidarity Lanes for the export of Ukraine's grain, highlight even more the importance and the new role of the port in the international supply chain.

5. Looking at the TEN-T map, your port is geographically located on the proposed Baltic-Black-Aegean Seas European Transport Corridor (current Orient-East Med Corridor), yet the port is not considered as a TEN-T port. In which ways does the Port of Alexandroupolis fulfil strategic functions and is essential for the TEN-T network beyond the traffic volumes? What benefits for the port do you expect from a TEN-T recognition?

The common recognition of the port as a commercial, military and energy hub requires its inclusion in the TEN-T network. The volumes of cargo handled are already increasing dramatically year after year, while at the same time the geostrategic importance of the port has skyrocketed after the war in Ukraine. The combination of the above makes imperative the need for the port to be included in the Comprehensive TEN-T network in order to ensure access to European financial funds that will allow its rapid development.

6. The Port of Alexandroupolis is developing into an energy hub. The EU, with its Green Deal ambitions and the recently published REPowerEU plan, is striving to get independent from Russian fossil fuels as well as climate neutral by 2050. As an energy port, how do you anticipate the projected changing energy landscape in Europe? Within this changing energy landscape, what are the business opportunities for your port? What will be the main challenge? 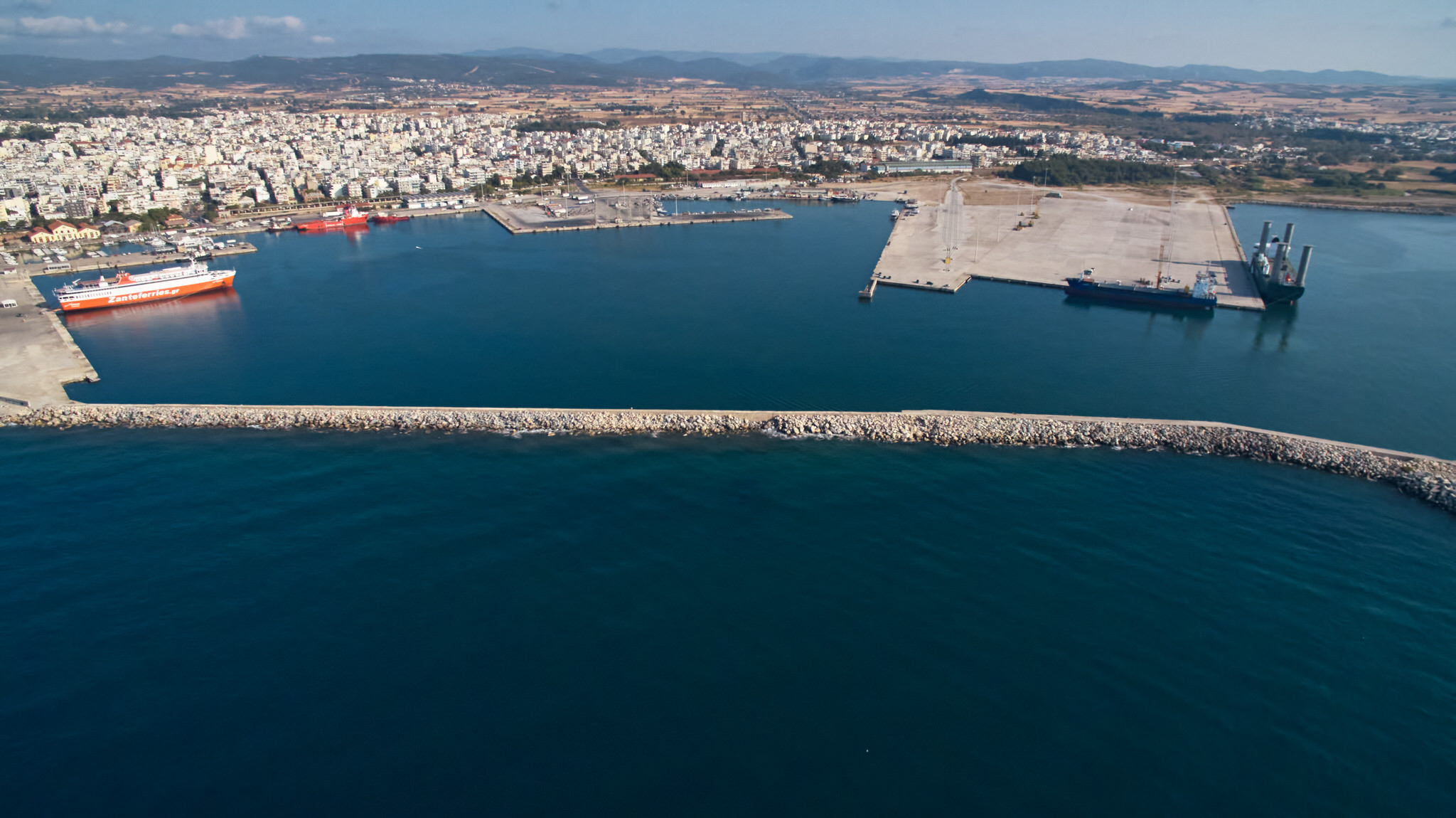 7. Recently, Bulgaria agreed on the need to double its capacity by using the LNG terminal being built in the port of Alexandroupolis. How will this work? What opportunities do you see in this increased LNG trade?

8. The Port of Alexandroupolis has a terminal for the export of agricultural and mineral cargoes from Ukraine to the Mediterranean and then around the world. With the ongoing war in Ukraine, what is the role of your port in terms of safe passage for Black Sea vessels? Subsequently, are you planning on extending the terminals’ capacity?

The port of Alexandroupolis, in collaboration with the Greek government and the European Commission (DG MOVE), is working on its participation plan in the EU Solidarity lanes for the export of Ukrainian grain and the restoration of the supply chain. In this context, I participate in continuous consultations with all the involved parties, formulating a specific investment plan for the construction of a new agricultural cargo terminal, which will be able to serve increased quantities quickly and following eco-friendly procedures. 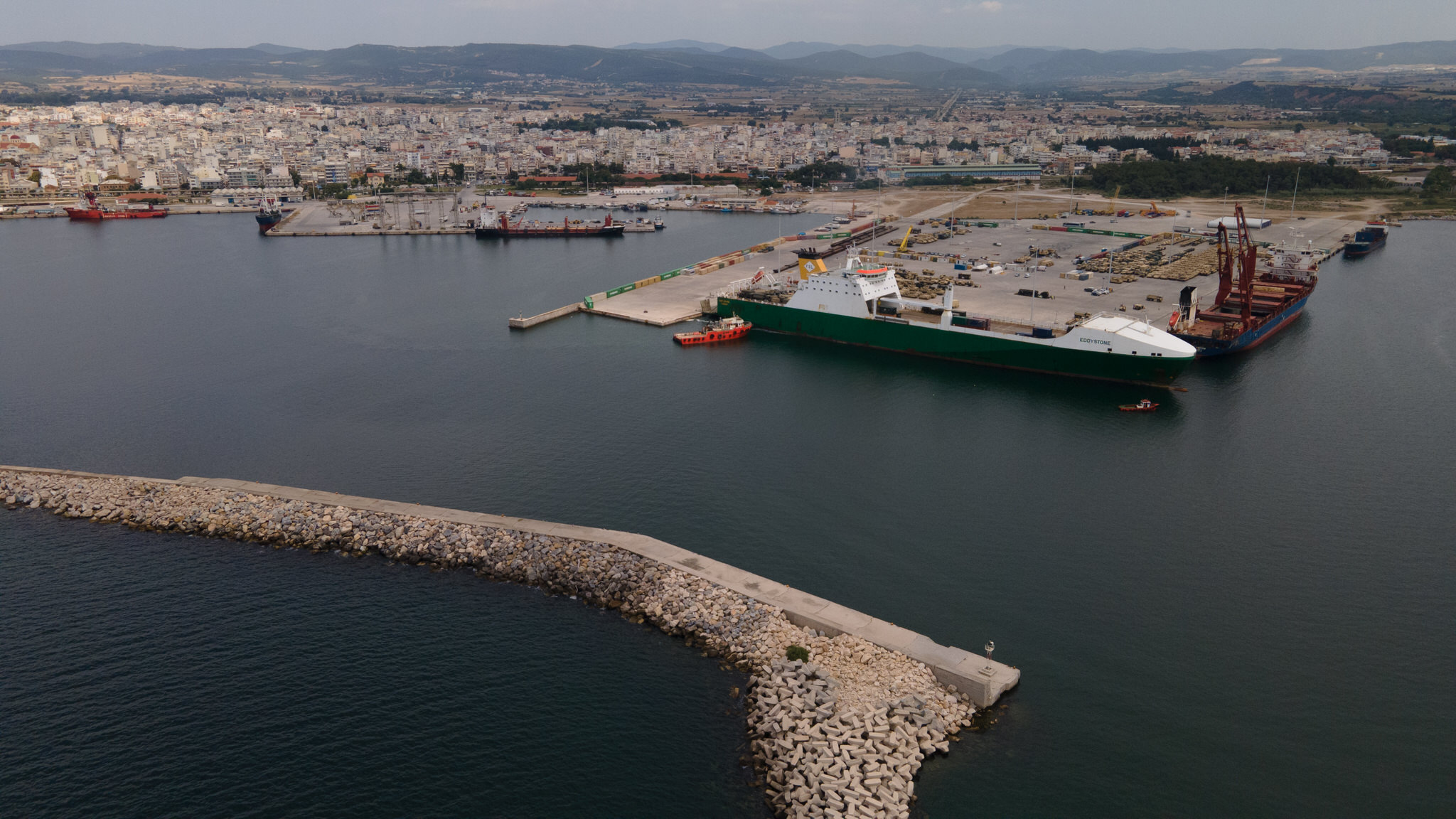 9. What are the environmental priorities for the Port of Alexandroupolis?

The fact that the port of Alexandroupolis is located next to the Ramsar protected area of the Evros Delta imposes our increased sensitivity to environmental issues. Environmental management issues are very high on my agenda, while at the same time we participate in many initiatives for the integration of best environmental practices.

10. How did you get into maritime transport? How did your career path lead to this position?

Born in Alexandroupolis from a family engaged in trade and commerce, I was fascinated with the port activity from an early age. Having been active in my career both in the field of construction as a structural engineer and in the field of tourism as a hotelier, I had established the importance of the port in the development of the place where I was born. So, when I was offered the position of CEO at the port of Alexandroupolis, it was a challenge and a lifelong dream for me. My vision is to reform Alexandroupolis from a provincial port to a logistics gateway and a tourism resort. 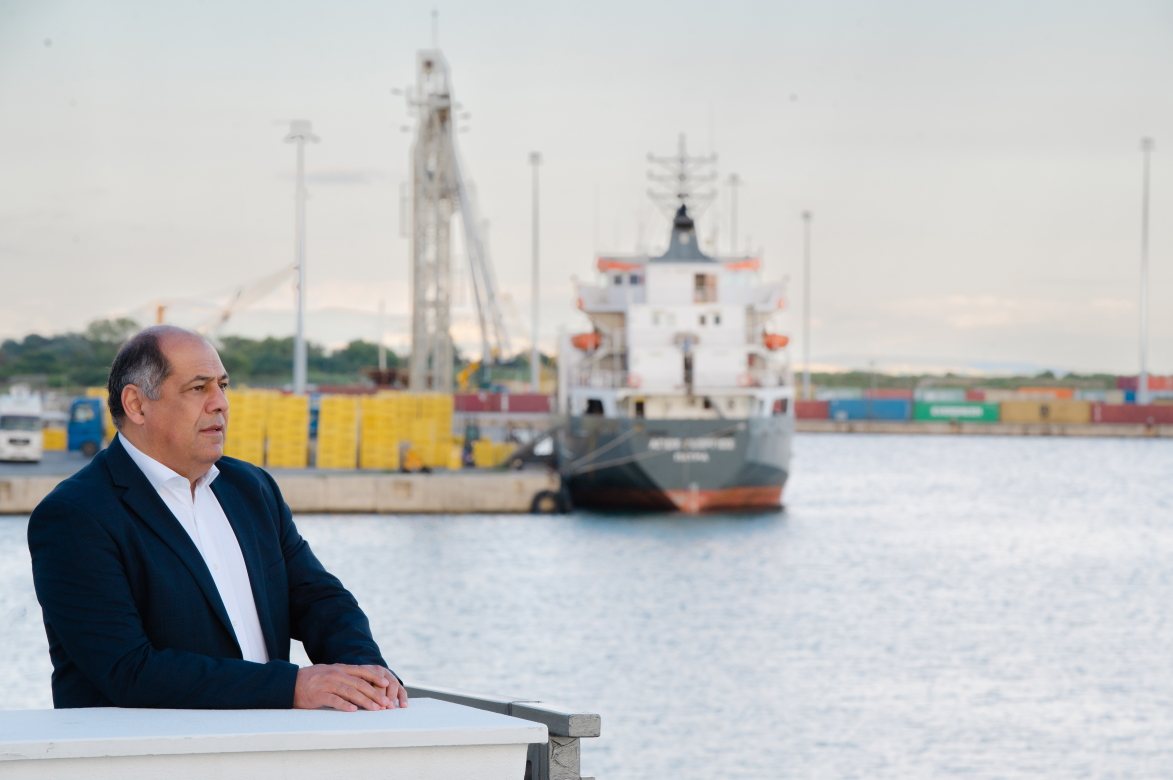